Lots going on, so let’s dive into it.

I’m alive! My health is back after a few weeks or hell, but I’m still waiting for one test result that’s creating some angst. Ugh – moving on.

I gotta talk about Texas Football for a second (skip if not interested).

As of Today, Texas sits way down the recruiting rankings for 2020.  After finishing in the top five over the last two years (Tom Herman is a recruiting animal), Texas finds itself outside the top twenty with only 10 verbal commitments.  To put that in perspective, most teams have over 15 verbals and almost all teams in the top 10 have over 20.  Needless to say, Texas fans have been stressed.  One would think that finishing the 2019 season with 10 wins and a hammering of Georgia in the Sugar Bowl would have made this recruiting cycle easier than it has been in years.  Not so much.

Look, the class is coming together nicely, but we’re missing out on all of the five star targets and we’re a long way from a 20 man class. Side note, Aggies are crutin well.  They are dreaming big.

Here are all of the 5 Star prospects Texas has been in the running for in this recruiting cycle.  Of the five listed, Texas was favored at some point with Evans, Ringo, and Robinson. The only one Texas really didn’t have a chance with was McClellan.  As you can see, the tables have turned and Texas is not likely to get any… ANY of these targets. 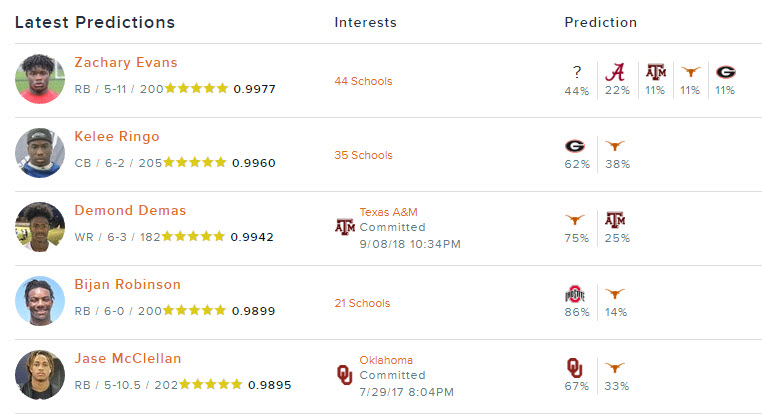 Texas will be fine.. right?  Moving on…

Hell, I don’t know what’s going to happen, but I’ve raised my cash position and reduced exposure across many of my accounts. I’m still long, just not as confidently as I was a week ago.

Why less bullish?  Well, everything.

"seeks to invest in large- and mid-capitalization segments of the MSCI China Index that are classified in the Consumer Discretionary Sector as per the Global Industry Classification System (GICS)."

I started to classify all EV players into 4 grps:

This is the part where you and I step up and become heroes.  by @ReformedBroker https://thereformedbroker.com/2020/11/19/this-is-the-part-where-you-and-i-step-up-and-become-heroes/