Earnings season is upon us and the first week did not disappoint.  JPM had everyone’s attention Friday for fear it would reinforce weakness concerns and embolden the bears.  However, the opposite happened.  JPM reported a great quarter and finished the day up 4.7%.  We collectively sighed in relief and the economy moves on.

Strong Initial Jobless Claims added to the market confidence, but are we approaching full employment?  Gotta see those wages go up to believe that is the case. 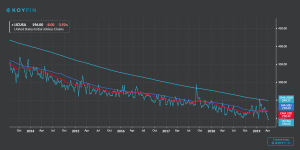 WM – Always one of my favorites. WM was bought up on Thursday and added more on Friday.  I like it.

CTAS – I’ve traded this many times.  As long as the economy is strong and hiring, this company will do well.

AYX – It’s just an animal. I would prefer an SMA50 entry, however.

AMT – they build those towers

CSX – I’m a fan of quick retest of double tops.

watching equities this week. technicals will take back seat to earnings, but breaking $SPY 321 opens to 329. The volume move to 329 will help shape the overall strength/possibility to get to 339.

Next earnings dates are estimated

Who gets to be reckless on Wall Street? https://www.vox.com/business-and-finance/2020/7/9/21314119/stock-market-day-trading-reddit-dave-portnoy-barstool-robinhood?utm_campaign=vox&utm_content=entry&utm_medium=social&utm_source=twitter via @voxdotcom